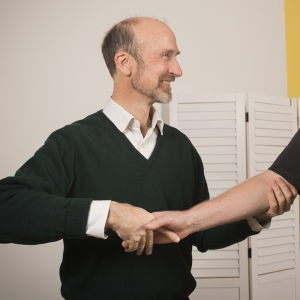 Sunday 26 April
The Unknown in Hands-on Work with Jean M. O. Fischer
Inhibition is the source of creativity and the unknown. The unknown can only happen if our habitual way of reacting does not get in the way. By inhibiting our habitual reaction we allow for the possibility of something new to arise. Sometimes hands-on work becomes formulaic and repetitive and we are not as open to perceiving ourselves and our pupils as we could be. This workshop will start with a short lying-down (but with a different thinking process than normal), followed by basic hands-on preparation in ourselves and in pairs, and then putting hands-on each other, but in a way which is exploring how to be more sensitive, perceptive and non-judgemental in our hands-on work. 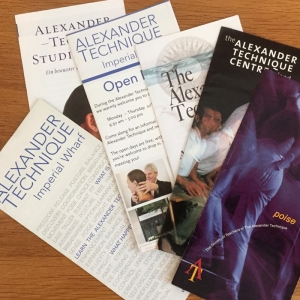 Saturday 25 April
Advertising and marketing with Jean M. O. Fischer
As a teacher for some 30 years in Britain I have participated in different PR strategies over the years. In this talk and discussion I want to share the different PR strategies STAT pursued, the different strategies we tried with the Pimlico Centre for the Alexander Technique, and those which other teachers have shared with me. There are a range of options which have been tested and which are available to us. Of course advertising is going to differ from country to country, and I cannot say what will work best in Austria. (Regina’s and my experiences in Austria are limited.) However, I can talk about my experiences in Britain. We will then have a discussion about what could work for each teacher as individual circumstances and skills are a factor. All very informal.

This is a FREE workshop for students on training courses and teachers. Max. 9 participants. To secure a place please email Jean. 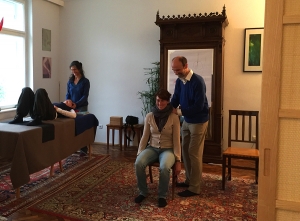 The Wiener Ausbildungszentrum für Alexander-Technik (WAAT) has invited Jean Fischer to teach at the teachers training course in Vienna approximately once month. Jean will also have some slots for private lessons available, if you are interested, please contact Jean directly.

The next dates are: 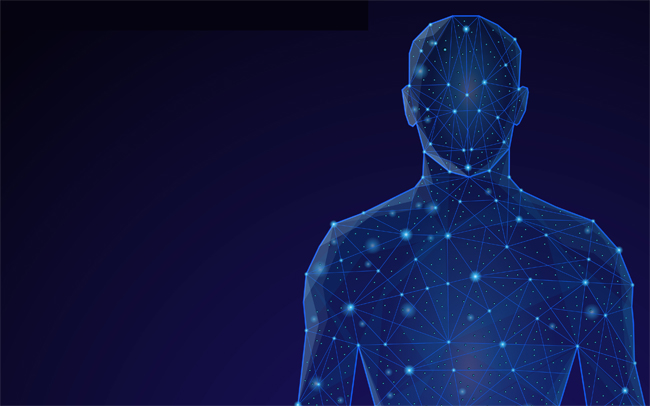 Whereas we are normally conscious of the space surrounding us we are rarely conscious of our own ‘space’ – our size, our shape, the space we take up. We frequently diminish ourselves in two concurrent ways: 1. by too much tension which tends to pull us downwards and inwards, in effect squeezing ourselves; and 2. by collapsing (frequently called ‘relaxing’) which also compresses us, reducing our shape and size. Both decrease our ‘inner space’ which in turn affects the functioning of our entire organism, both physically and psychologically. For example by diminishing our breathing capacity, compressing our joints, narrowing our blood vessels, and therefore making us feel smaller. With the Alexander Technique we are not setting out with an idée fixe as to what we are or should be – there is no predefined ‘ideal’ posture – but we are learning how to prevent constricting ourselves. The AT is how to allow ourselves our true size and shape. And it is an ‘allowance’, not an imposition. We can allow ourselves to take up the space we inhabit. It is much more an ‘inner’ expansion rather than ‘outer’ expansion (although there are visible effects as well, these are side-effects and not the primary object of the AT). The Alexander Technique is inviting you to boldly go where you may have not gone before – your own personal and individual space.

* With apologies to Star Trek.

The Wiener Ausbildungszentrum für Alexander-Technik (WAAT) has invited Jean Fischer to teach at the teachers training course in Vienna approximately once month. Jean will also have some slots for private lessons available, if you are interested, please contact Jean directly.

The next date is:

Last Saturday we gave two Alexander Technique workshops to the Konservatorij za glasbo in balet Maribor – the Music and Ballet Conservatory in Maribor, Slovenia. About 30 students and teachers of the string department participated in these two theoretical and practical introductions to the Technique.

The Alexander Technique is an invaluable tool for learning to play with greater ease and prevent problems that often arise due to unnecessary strain and unhealthy movement patterns. It is adaptable to any musical activity because it teaches what to prevent, what ‘not’ to do. It is well known among musicians in several countries where it is part of the curriculum in music schools and music colleges. 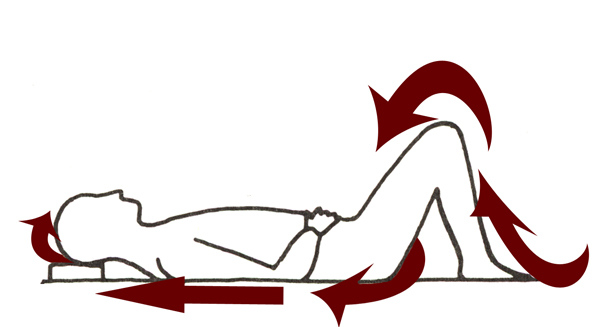 Your Alexander teacher will have provided you with the classical directions of the Technique (along the lines of ‘neck to release, head free to go forwards and upwards’ etc., the exact phrasing depends on the teacher). Here inhibition (non-doing) and direction are closely choreographed in the activity of thinking. Every direction has to be preceded by inhibition so that the whole process is one of prevention and non-doing. The expansion and general release of the whole muscular system is first and foremost an undoing, only gradually does it become a subtle toning-up of the muscles, whereby the whole neuro-muscular system is enlivened, alive and alert, and in a state of readiness. Lying down is salutary for practising this thinking (inhibition and direction) which you can then continue as you resume your everyday activities. Ultimately the experiences of lying down inform how you go about daily life.

Many people find this simple (on paper) practice difficult, but with time and practice it becomes easy and flowing. 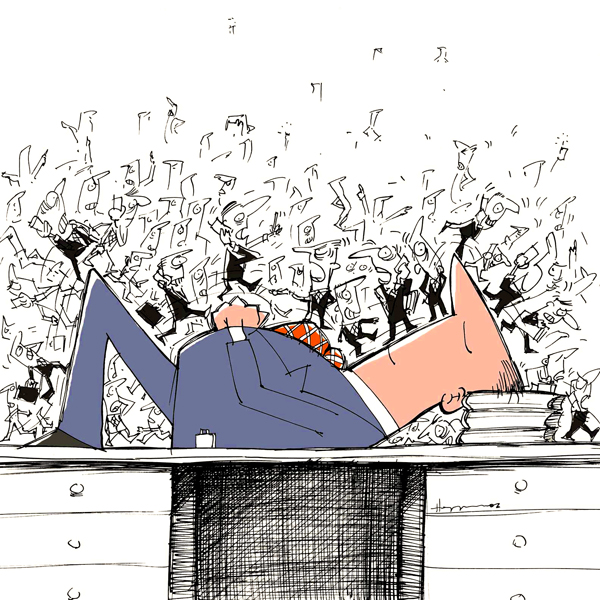 Whereas adopting the physical position is easy, the mental attitude required takes some practice. First, it is an attitude of observation and non-interference. It may take some time to allow the mind–body to quieten down; to reach some degree of stillness where you are not occupied with wandering thoughts, such as thinking of what you have done and what you are to do. We want to reach a point where it is alright to be present, to observe yourself without judgement and without trying to correct your position. To be quietly here and now, when awareness is happening by itself. Eyes are open and attention is gentle. It is not a matter of work, it is not a matter of sleep. Many thoughts and feelings may pass by, but you just observe them as they run through you.


The lying-down procedure (which goes by a number of names in the Alexander Technique) is one of the most classical procedures of the Technique. You lie down on a firm surface, knees up, head supported by books so that the head is not pulled back but that the neck is encouraged to release and a lengthening of the spine is promoted. Generally, it would mean that the neck vertebrae are more or less aligned with the rest of the spine, allowing for the natural curves of the spine. The hands are placed comfortably so as to allow the shoulders to ease and widen. The position adopted is one which facilitates lengthening and widening, and it will vary in detail from individual to individual.

This position is beneficial in itself. The knees up position tends to diminish any muscular pull on your lower back. While lying down the intervertebral discs reabsorb fluid (which is why most people are 1–2 cm taller in the morning than in the evening).* The back and neck muscles are allowed a – for most people – much needed rest.

Lying down for 10–15 minutes a day is a beneficial practice. This is a first step. 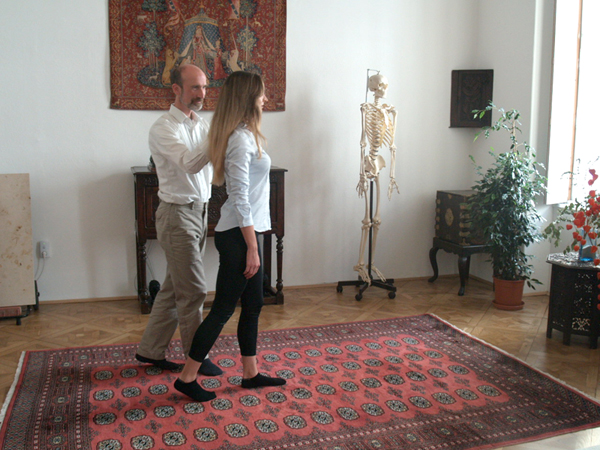 Alexander Technique Studio (Graz) is planning to start a three-year teacher training course in April 2020. The course provides all the training required to be come a fully qualified Alexander Technique teacher, with certification recognised by the the Austrian Society of the Alexander Technique (Gesellschaft für FM Alexander-Technik Österreich). The training provides over 1,600 hours, with a minimum 1:4 teacher:student ratio, running Mondays to Thursdays.

The emphasis throughout the course is on learning the means-whereby for exploring your own use. The purpose is to develop sensory appreciation through inhibition and direction and to apply this process to hands-on work.

Details about the training course – our approach, the structure, term dates, how to apply – can be found on Teacher Training > Overview.